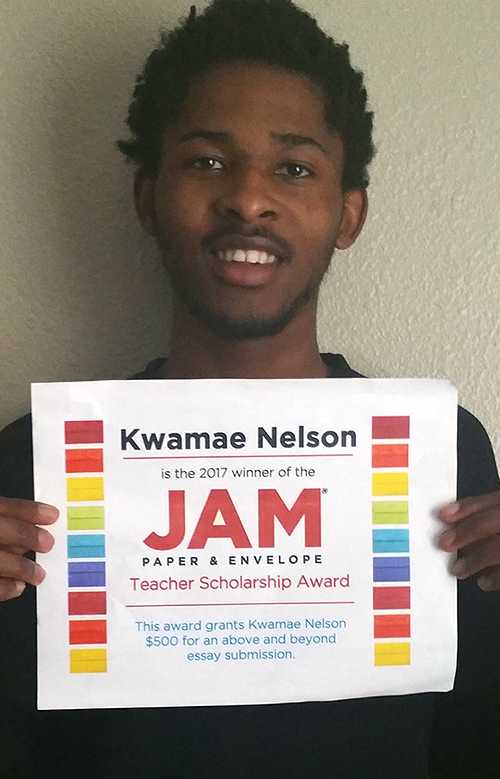 So to start things off, what level of teaching do you intend to pursue? From reading your essay, we think you’d make an awesome professor.

I would love to begin my teaching career in the middle school level. The middle school time is an interesting experience where students begin to ask questions about themselves and the world that surrounds them. During this time, the influence of peers, instructors, and the material taught are enormously important in the lifelong development of the student. I’ve rarely thought of becoming a college professor though. That might come along at some point in my life.

What specifically, if anything, made you want to become a teacher?

Going through high school and middle school feeling like school is a waste of time when I loved elementary school so much. I was never taught the importance of learning and utilizing what one has learned in life until I got to college and began applying my knowledge to life that I realized how much of an impact school and teachers have on students.

In your essay, you spoke about how when you got to college you were shocked to learn that minorities had positively contributed to American history. What was the most shocking thing that you learned from your college education in regards to race, ethnicity, and our country’s history?

The impact of naming and the systematic implications of why this country is the way it is towards certain peoples. For example, utilizing the term minorities when referring to people of color, however if you think about it, people of color are the majority and white people are truly the minorities. Just labeling people of color as minorities means that there is a group who is the majority and that naming holds power even if people do not realize it. No matter how many people deny it, race and ethnicity will always be an important part of this country’s history. The method in which this country was built upon the backs of slavery, and how that not only affected sciences that were studied and the laws that were made, but also the financial state of the descendants. There is a group who profits from slavery still to this day even though slavery is not practiced. That along, with laws such as the Jim Crow laws which prevented groups from obtaining loans to create businesses, buying land, vote along with many other social impacts contributed to the science that attempted to prove that one group is inferior to another group scientifically. This shocked me at first, not because of the content, but because it took me almost twenty years to put into words what I have felt for so long growing up in this country.

With that being said, was there a specific moment in your pre-college education in which you questioned what you were being taught? Can you describe it to us?

Not that I can think of. My entire pre-college education I kind of apathetically went through the motions. My goal was to graduate, not learn so I did not pay as much attention to the content I was being taught.

With our country being seemingly more divided now than ever, how does education play into your vision of the future? Essentially, what do you want to teach future generations about specifically?

I envision an educated populous that makes decision for the benefit of humankind, not just the benefit of countries or groups. In order for this to happen, the truth must become the norm. Governments must be honest with their peoples. This will start when the people who obtain those positions in government hold those morals. I hold a firm belief that the younger generation, if instructed in an empowering, engaging, and inspiring way, will have all of the tools necessary to bring about positive change in this world. I want to inspire students to utilize their education in their lives to bring about change that will liberate all people in the world.