How to Address an Envelope All the Different Ways 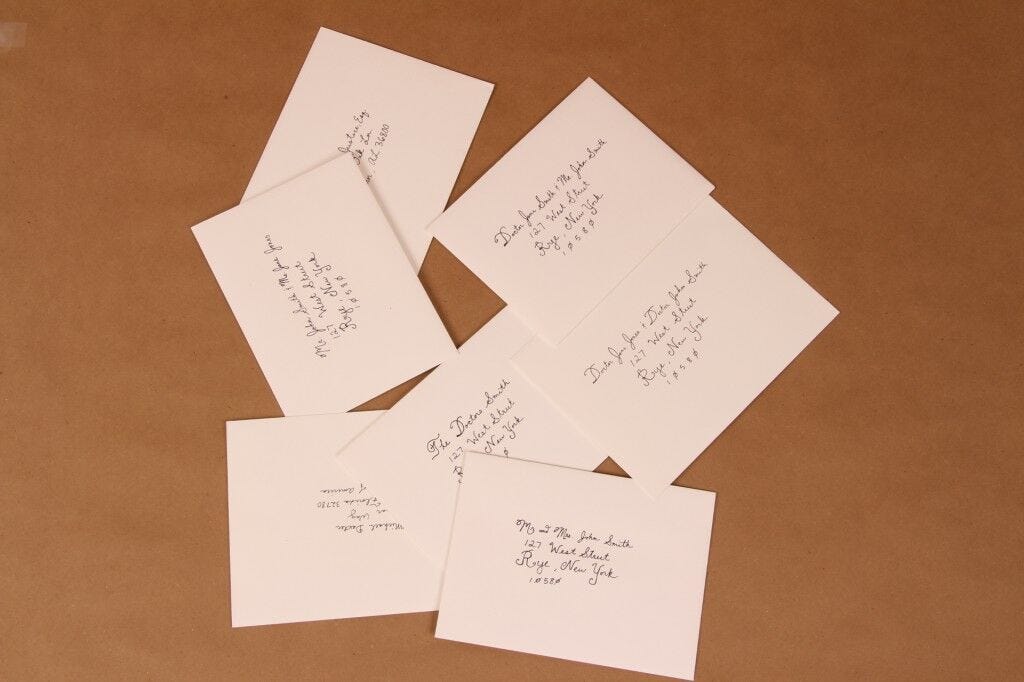 We’ve all written letters, paid bills, sent out birthday party invitations, and mailed thank you notes. We know how to address an envelope… or do we? As easy as it may seem, sometimes sending out a letter can be a little more complicated than just jotting down a name and address.  Fortunately, the experts at JAM Paper are here to tell you the rules and etiquette of addressing your letters. Domestic Letters These are the letters you’ve been learning to address since you were in kindergarten. You probably already know how to write these, but why not get a refresher course? 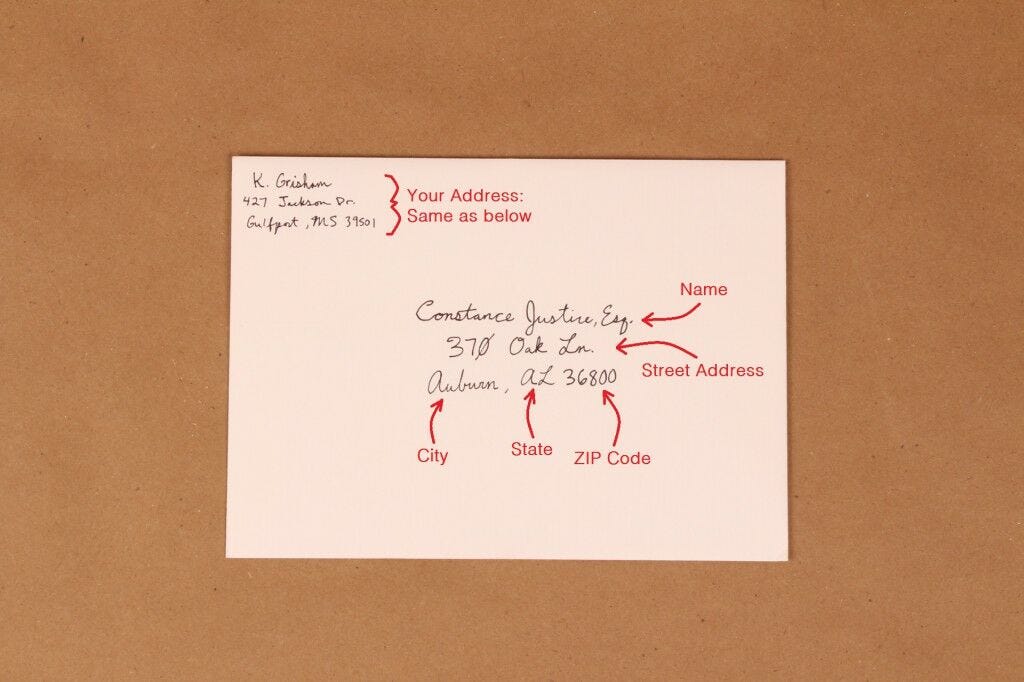 International Letters These are slightly trickier than the domestic letters, but not by much. You just have to make sure that you include the country after the normal address. International addresses can be ordered differently than addresses within the US, so make sure to look up how each country does it. 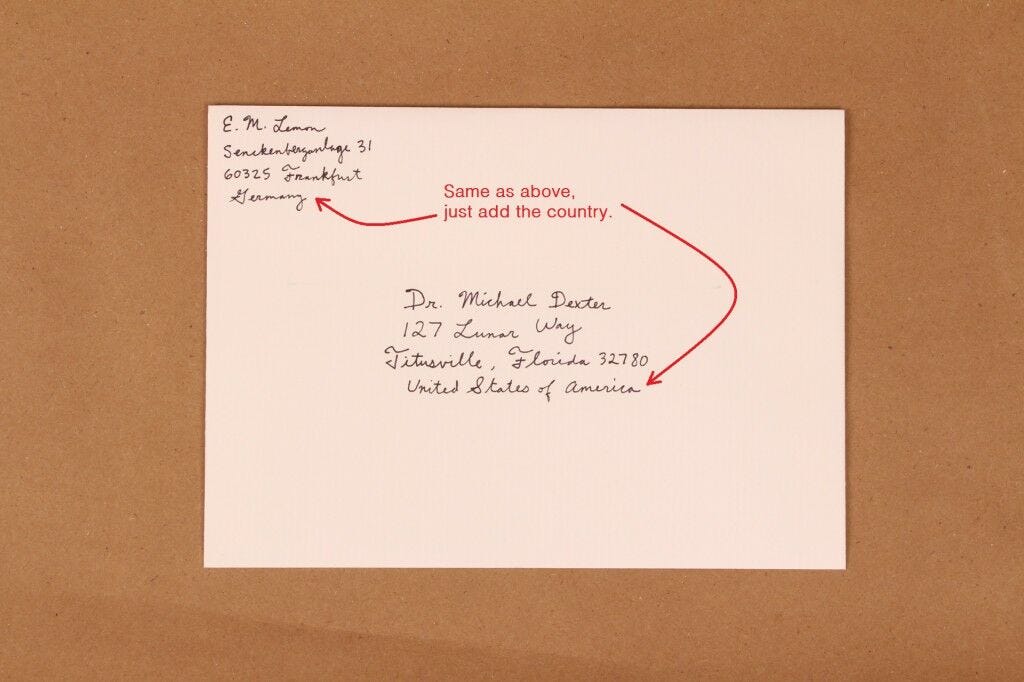 Invitations Odds are, you will send out an invitation at some point, whether it’s for your wedding or your kid’s birthday party. And odds are, you may encounter some addressees whose names and titles are confusing. To help you out, here are some invitation etiquette rules for you to follow (or break.) Typical Married Couple Because when a man and woman get married and the woman takes her husband’s last name, she no longer gets to have a first name.* 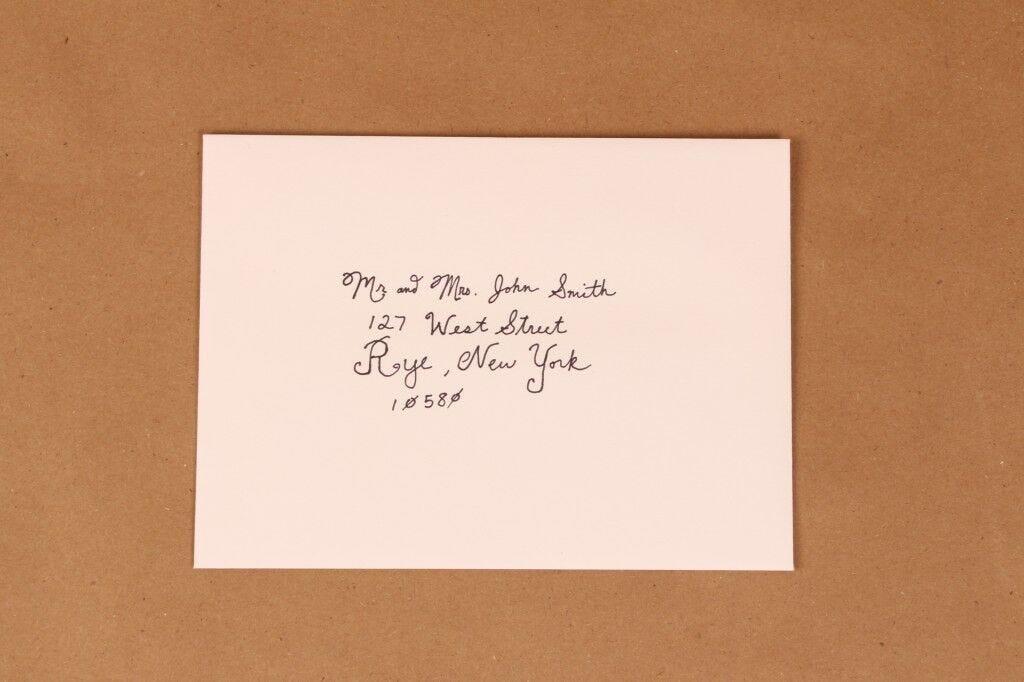 *If you think this is dumb, just write Mr. John Smith & Mrs. Jane Smith. Nobody will think this is weird. Couple with Different Last Names For people who like their own names, list them separately. The man is supposed to be listed first because men are more important than women. * 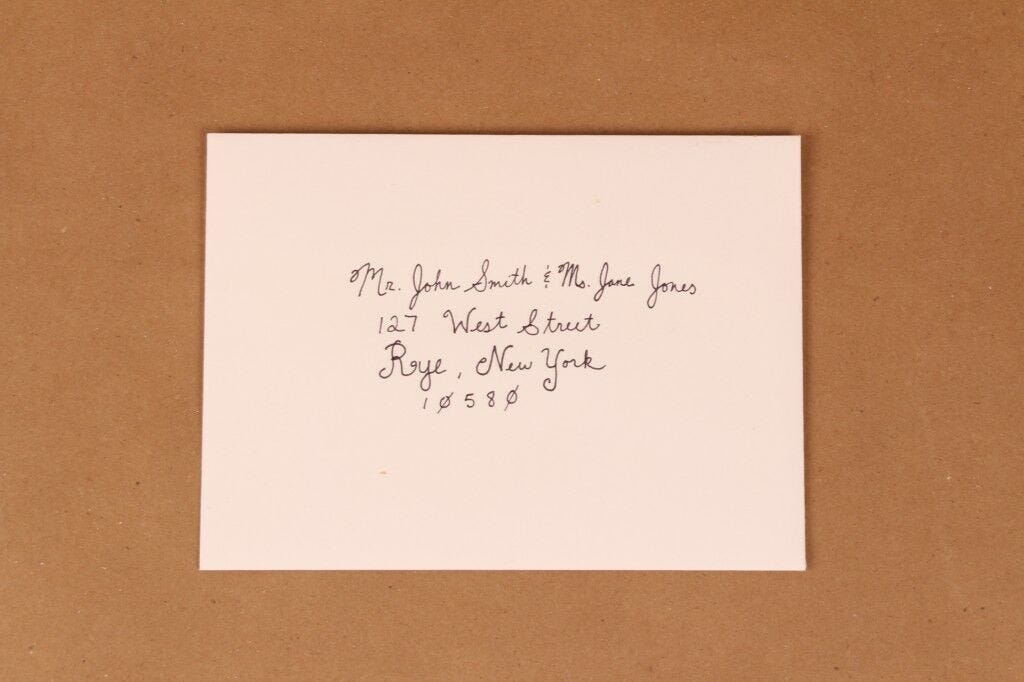 *Again, list whomever you want first. The patriarchy police will not arrest you, I swear. Important People with the Same Last Name If your profession comes with a cool title, then you are one of the special few who doesn’t have to slum it with the rest of us Mr’s and Ms’s. For single titled people, address them by their title, first name, and last name, such as Doctor Jane Jones. For titled people who marry other titled people who they probably met in medical school, do this. 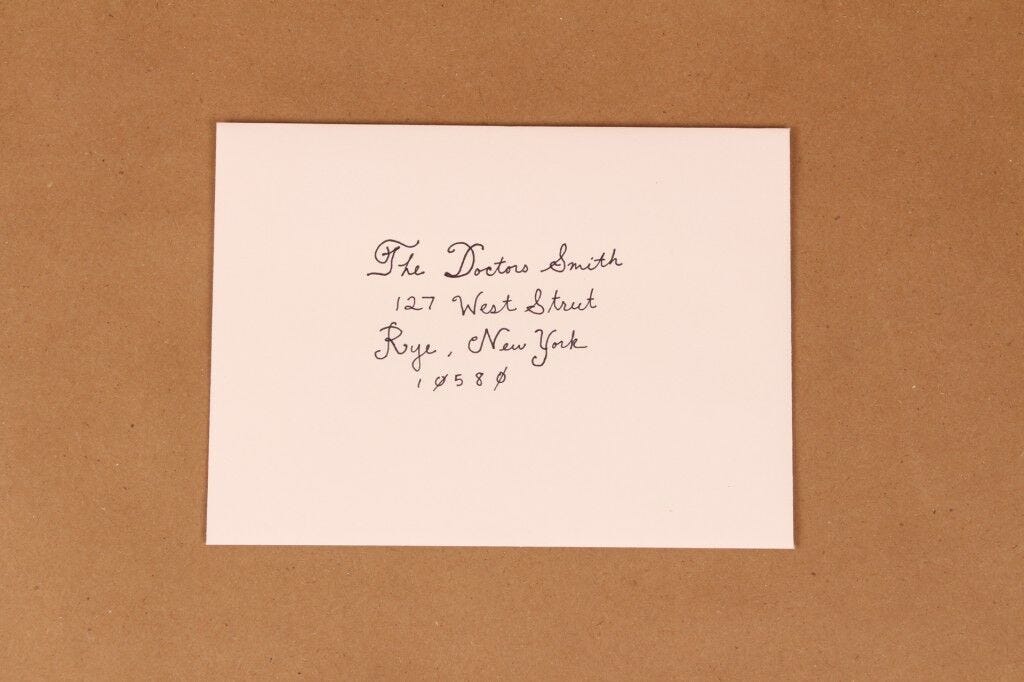 Important People with Different Last Names For people with titles who have partners with titles, yet they choose to keep their own last names, list them separately. List partners in alphabetical order, because that’s really the only way that makes sense. 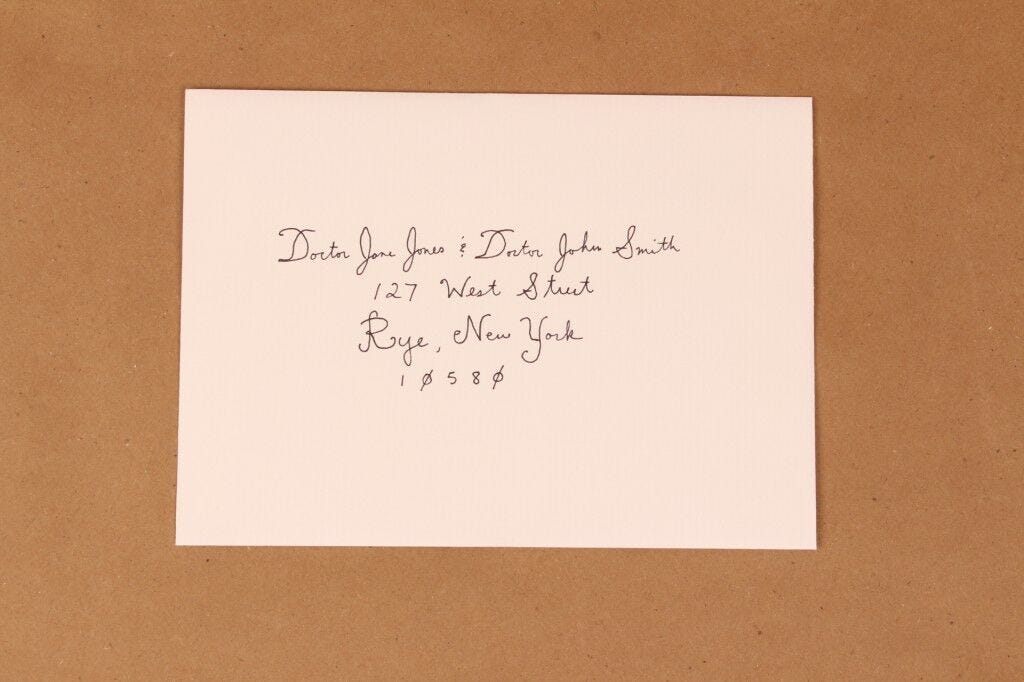 Important People who Marry Below Their Pay Grade Because if all those doctor TV shows taught us anything, it’s that doctor marriages always end in divorce followed by an Ebola outbreak. Get yourself a househusband instead. 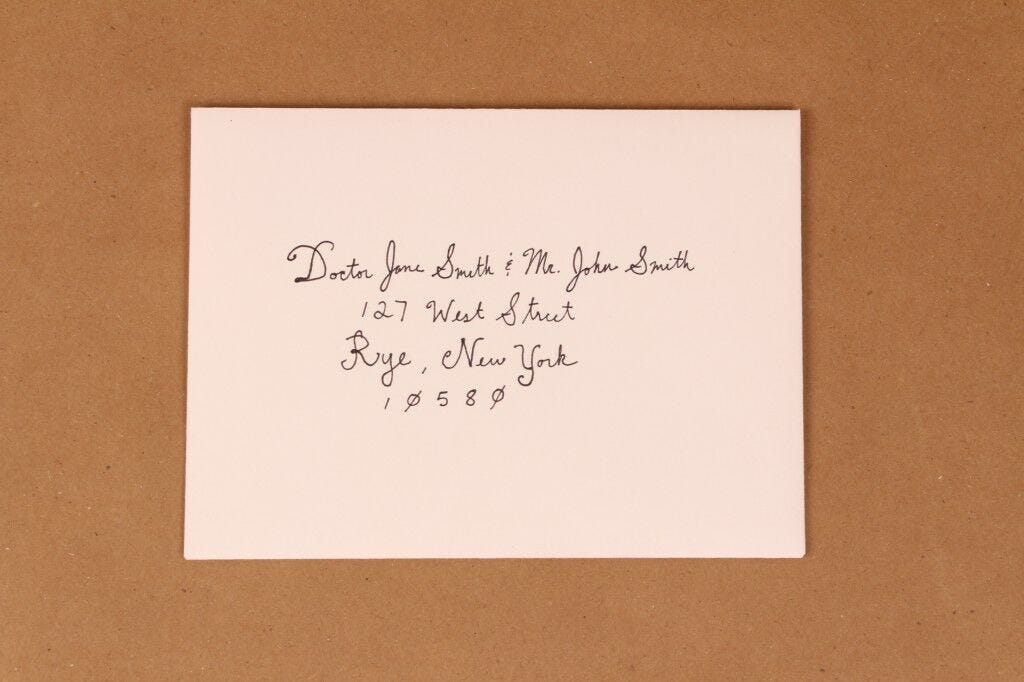 Remember, these are just rules, and rules are meant to be broken. Just get the address right and keep your handwriting neat, and it will get where it needs to go. And most importantly, don't forget to stock up on some envelopes for all your letter writing needs.
Envelope How to Address an Envelope