Airmail Envelopes History - 1918 to the Present

Airmail is a service provided when mail is transported through the air rather than by land or sea. This postal service has a rich history in America dating back to the 20's. Lets take a look at how Airmail has helped shape mail delivery and the use of envelopes in our world today.

Airmail service in the U.S began on May 15, 1918 with the U.S Army piloting the airplanes (This wouldn't be the only time the U.S Army was involved in the program, but more on that later). It wasn't until  August 12, 1918, that the Post Office Department (POD) took  full control and began using their own pilots. The POD held the sole responsibility of the Airmail program for a number of years until private aviation companies took over in the late 20's.

Scandal eventually tarnished the program in 1933. Postmaster General Walter Brown was given the power to consolidate routes, and the majority of the nations airmail routes were given to only three privately held companies, which forced out any competition. This scandal was dubbed the Airmail fiasco by the press. After President Franklin D. Roosevelt took office he canceled the contracts with the three avionic companies and gave the job back to the Army Air Corps on February 19, 1934.

Over the next five years, Army Air Corp pilots struggled to keep up with the high demand. Long flights and poor weather caused 66 Army Air Corp plane crashes. This forced the government to turn the service  over to private companies once again. In 1971, Federal Express (or FedEx) designed a shipping system exclusively for shipping cargo by air. U.S Airmail ended on October 10, 1975, when all domestic First Class mails were sent at the normal First Class rate. 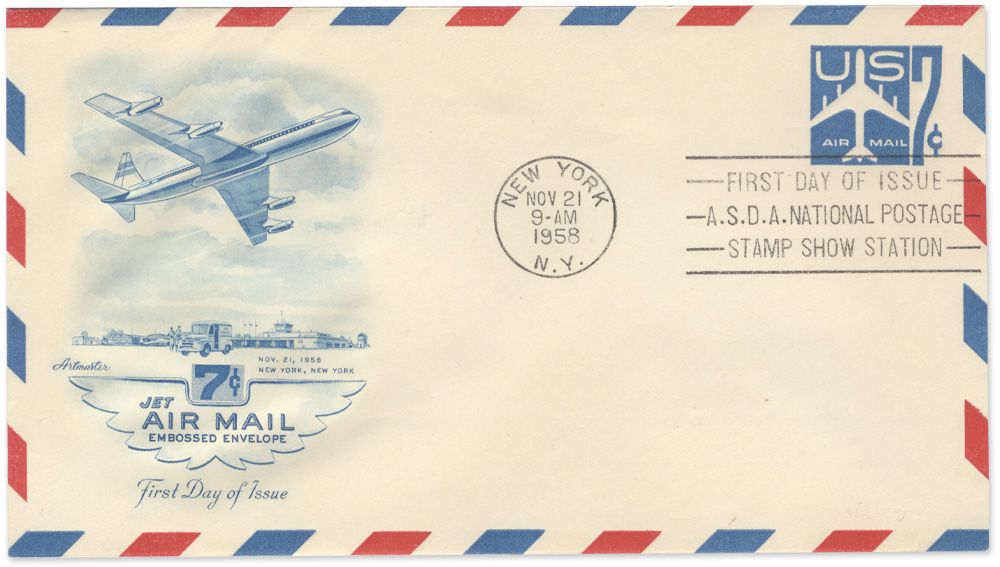 Airmail envelopes were typically designed with a colored boarder depending on the country in which the letter came from. For example, envelopes from the US or the UK would have red and blue boarder, since these colors are in the nations' flags. This made it easier during mail separation. One could easily pick out international mail from a nation's internal mail due to the colored edges of the envelopes.

With the growth of eCommerce businesses, international shipping is at an all time high. The USPS has partnered with FedEx with the Global Express Guaranteed® which relies on FedEx Express® transportation to deliver packages worldwide.  Although the transportation service known as Airmail is gone (it's been replaced with services like International Priority Airmail™), the United States Postal Service trademarked the name Air Mail in In June 2006. This classic Airmail style of stationary is now sold for decorative use rather than practical use. You can relive a little piece of postal history by opting to use these decorative red and blue bordered envelopes and paper.